Ever heard of something called "Brominated Vegetable Oil"?

But have a look at the label of your next bottle of Gatorade. There it is. In fact, about 10 percent of drinks sold in the United States contain brominated vegetable oil, including Mountain Dew, also made by PepsiCo; Powerade, Fanta Orange and Fresca from Coca-Cola; and Squirt and Sunkist Peach Soda, made by the Dr Pepper Snapple Group. And it is potentially dangerous. It is a flame retardant. 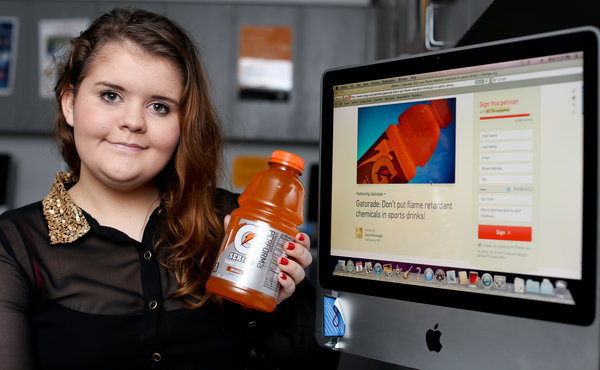 The ingredient is added often to citrus drinks to help keep the fruit flavoring evenly distributed; without it, the flavoring would separate.

Use of the substance in the United States has been debated for more than three decades. The European Union has long banned the substance from foods, requiring use of other ingredients. Japan recently moved to do the same.

In the US, switching to an alternative is too costly, according to the softdrinks producers.

Jeff Dahncke, a spokesman for PepsiCo, noted that brominated vegetable oil had been deemed safe for consumption by federal regulators. “As standard practice, we constantly evaluate our formulas and ingredients to ensure they comply with federal regulations and meet the high quality standards our consumers and athletes expect — from functionality to great taste,” he said in an e-mail.

The renewed debate, which has brought attention to the arcane world of additive regulation, comes as consumers show increasing interest in food ingredients and have new tools to learn about them. Walmart’s app, for instance, allows access to lists of ingredients in foods in its stores.

Brominated vegetable oil contains bromine, the element found in brominated flame retardants, used in things like upholstered furniture and children’s products. Research has found brominate flame retardants building up in the body and breast milk, and animal and some human studies have linked them to neurological impairment, reduced fertility, changes in thyroid hormones and puberty at an earlier age.

Limited studies of the effects of brominated vegetable oil in animals and in humans found buildups of bromine in fatty tissues. Rats that ingested large quantities of the substance in their diets developed heart lesions.

Its use in foods dates back to the 1930s, well before Congress amended the Food, Drug and Cosmetic Act to add regulation of new food additives to the responsibilities of the Food and Drug Administration. But Congress exempted two groups of additives, those already sanctioned by the F.D.A. or the Department of Agriculture, or those experts deemed “generally recognized as safe.”

The second exemption created what Tom Neltner, director of the Pew Charitable Trusts’ food additives project, a three-year investigation into how food additives are regulated, calls “the loophole that swallowed the law.” A company can create a new additive, publish safety data about it on its Web site and pay a law firm or consulting firm to vet it to establish it as “generally recognized as safe” — without ever notifying the F.D.A., Mr. Neltner said.

About 10,000 chemicals are allowed to be added to foods, about 3,000 of which have never been reviewed for safety by the F.D.A., according to Pew’s research. Of those, about 1,000 never come before the F.D.A. unless someone has a problem with them; they are declared safe by a company and its handpicked advisers.

“I worked on the industrial and consumer products side of things in the past, and if you take a new chemical and put it into, say, a tennis racket, you have to notify the E.P.A. before you put it in,” Mr. Neltner said, referring to the Environmental Protection Agency. “But if you put it into food and can document it as recognized as safe by someone expert, you don’t have to tell the F.D.A.”

Michael R. Taylor, deputy commissioner for food and veterinary medicine at the agency, said: “From our standpoint, we do need to look at whether this regime established by Congress almost 60 years ago gives us the information we need. It would be desirable for F.D.A. to have more information on products being added to food.”

The F.D.A. is aware of the controversy surrounding brominated vegetable oil. It took the ingredient off its list of substances “generally recognized as safe” in 1970, after the Flavor and Extract Manufacturers Association revoked its approval of it. The group’s expert panel is the primary body for evaluating the safety of flavoring substances added to food; if it rules something is “generally recognized as safe,” the F.D.A. goes along.

John Halligan, senior adviser and general counsel to the organization, said that during the late 1960s and early 1970s, the expert panel was reviewing many older additives that had been grandfathered into “generally recognized as safe” status when the federal law was changed.

“They came to B.V.O. and there had been some new studies done which weren’t definitive,” he said. “The panel looked at data and said it doesn’t look like we have an adequate database here to conclude this substance is generally recognized as safe, so they revoked its status.”

Subsequently, Patricia El-Hinnawy, a spokeswoman for the F.D.A, wrote in an e-mail, the agency asked the association to do studies on brominated vegetable oil in mice, rats, dogs and pigs. She said that the organization made “several submissions of safety data” to the F.D.A. while those studies were going on, roughly from 1971 to 1974.

“F.D.A. determined that the totality of evidence supported the safe use of B.V.O. in fruit-flavored beverages up to 15 parts per million,” Ms. El-Hinnawy wrote.

That ruling, made in 1977, was supposed to be interim, pending more studies, but 35 years later it is unchanged. “Any change in the interim status of B.V.O. would require an expenditure of F.D.A.’s limited resources, which is not a public health protection priority for the agency at this time,” Ms. El-Hinnawy wrote.

Meanwhile, no further testing has been done. While most people have limited exposure to brominated vegetable oil, an extensive article about it by Environmental Health News that ran in Scientific American last year found that video gamers and others who binge on sodas and other drinks containing the ingredient experience skin lesions, nerve disorders and memory loss.

Michael F. Jacobson, co-founder and executive director of the Center for Science in the Public Interest, said some studies show that B.V.O. collects in fatty tissues, raising questions about what its effect might be during weight loss. Dr. Jacobson, who looked into the research on brominated vegetable oil after being asked about it by The New York Times, concluded, “The testing of B.V.O. is abysmal.”

He said the longest studies of the ingredient he could find covered only four months, while most food additives are usually tested for two years, making it impossible to establish a safe level of consumption.